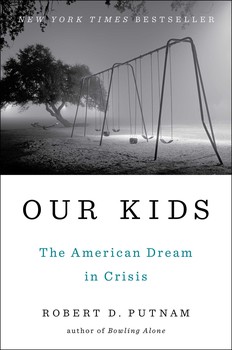 In this chapter we change focus from individual families and schools to broader social networks, addressing “Community”. As with previous chapters I’ll summarize its content, then offer some reflections, followed by questions.

Once again Our Kids changes location, this time removing to the Philadelphia area, in and around the Main Line.  Once more there are two contrasting families located not far from each other.  The book also changes its racial focus to white families.

The wealthy family is very well off.  Marnie and her two daughters live in a world of Ivy League education, “private schools, horseback riding, and an extensive household staff” (194).  Non-economic stresses occur, including divorce and ADHD, but money and supportive people see the women through.  Some of those people are connected to Marnie’s family through weak ties, a major point of this chapter (198).

In contrast Molly and her daughters live far down the socio-economic scale, surrounded by crime, illness, addiction, unplanned and early pregnancies, and social disintegration. The local church is able to help Molly’s family, until it was “closed down for sexual abuse” (201); later, another church was helpful (202-3).  Instead of the elite private schools Marnie’s daughters enjoy, Molly’s children endure public schools staffed by people convinced the girls were “not going to end up being anything” (201).  One, Lisa, takes post-secondary classes, “but that led to no job and left her with a daunting $50,000 student debt.” (204)  Summed up, “Molly tried to save her daughters from alcohol, drugs, and pregnancy, but she was unsuccessful.” (205)

Putnam uses the two stories to illustrate several arguments about how communities function.  First, wealthier and better-educated people tend to have “wider and deeper social networks”, while “less educated Americans have sparser, more redundant social networks, concentrated around their own family.” (207)  Second, the wealthy and better educated “have many more ‘weak ties’, that is, connections to wider, more diverse networks.” (208)  Why does this matter?  The better one’s social networking, the more defenses one has against adversity, and the greater the range of opportunities.

[S]uch ties allow educated, affluent parents and their children to tap a wealth of expertise and support that is simply inaccessible to parents and children who are less well off. (208)

The Chanticleer Garden house, in the Main Line area.

Social networks lead to a third point, access to supportive mentors, both formal and in-.  As you might expect, wealthier people have access to far more mentoring than do the poor (213-216).  This has implications for personal development.

The chapter concludes by tracing economic inequality through neighborhoods (217-223) and religion (223-225).  Our Kids finds neighborhoods increasingly divides by economic gaps, which tend to become self-reinforcing as they determine academic and career achievement.  “The greater the inequality across neighborhoods, the lower the rate of upward social mobility and the greater the opportunity gap.” (223)

Additionally, social cohesion and neighborly mutual aid break down with lower incomes, as trust among people living near each other erodes.  Poor children grow up isolated.  “In a bitter Facebook posting, Mary Sue (an impoverished young woman we met in Port Clinton) expressed a common view among poor kids across the country: ‘Love gets you hurt; trust gets you killed.'” (221)

Religious groups can offer support services to many people, but poor people are decreasing their church attendance.   “If you listen carefully, hymns in American houses of worship are increasingly sung in upper-class accents.” (225)

We don’t see as many scissors charts as some earlier chapters, but there are some, as on 225.

Putnam again offers skepticism about the internet.  This time he relies on Eszter Hargittai‘s work to demonstrate that wealthier people not only have better technological access, but also a greater set of skills for using the digital world.  “[T]he internet seems more likely to widen the opportunity gap than to close it” (211-2).

Does Putnam’s picture of different levels of social connection in the present day match your experience and observations?

While writing this post, the Baltimore riots occurred (or started).  I found this article showing a day in the life of that city’s wealthy residents.  That’s a fine Putnam pairing.

Amanda Sturgill’s students thought of poverty’s many impacts on kids in schools as “death by 1000 cuts rather than one big blow“.  Is there a similar set of ongoing pressures apparent in the lack of social ties?

Daniel devoted a fine comment – and a career! – to helping build mentoring in Chicago.  What would it take to develop a mentoring system that could account for this deep class bias?

Val Bock teased apart nuances of the forms of obedience taught to poor kids.  How does that kind of training play out in the social world of this chapter?

Jenny Colvin detected a silver lining in this often dark book by noting the positive impact some helpful individuals had on poor kids.  How often can those good encounters happen in the world of this chapter?

How is the town and character narrative structure doing at this point in the book?

Previously in our reading:

Next week, the concluding chapter, “What is to be Done?”

This entry was posted in research topics, reviews, Uncategorized and tagged Putnam2015. Bookmark the permalink.