Posted on January 2, 2017 by Bryan Alexander

Where do we go for inspiration and optimism?

I’ve been asking myself this over the past half year, especially when I’ve been submerged in dark times.  Obviously the Trump election has been a force for depression.  2016 has for many been an awful year (check Charlie Brooker’s brilliant Newswipe for a darkly humorous and brilliant look back). The vicissitudes of small business life include horrendously stressful periods.  My research work, too, often leads me to negativity, since, as a futurist, I have to deal with the full range of possibilities, utopian to dystopian.  I can’t shy away from forces and outcomes that are depressing, frustrating, or simply awful.

Readers here know I’ve written and spoken about the latter.  My queen sacrifice posts, for example, point to serious problems across American higher education.  The grinding combination of demographics (birth rate decline), economics (escalating inequality, booming debt, the specter of financialization), and academic policy (defensive, hierarchy-celebrating, anti-collaborative) does not usually inspire me with hope for higher ed’s future.  Our bipartisan political embrace of policies that build up a cyberpunk dystopia prove that reading sf is useful, but not enough people have done so to realize what we’re doing.

I could go on.

So as 2017 dawns, how can we move forward without giving way to despair?

Two powerful sources of inspiration have buoyed me recently, and perhaps they can give optimism to other people.  (I wrote about other sources way back in 2014, if you’d like an extra dose.)

One is the unfolding capabilities of digital storytelling.  Ever since the 1980s and 1990s we have been using new technologies to tell stories, from hypertext to Usenet to Flash and MUDs.  The Center for Digital Storytelling (now StoryCenter) launched in the 1990s and showed us all – not media gurus, but anyone – how to make personal stories using digital video.  As new technologies have come down the pike and grown, people have been creating narratives with them: podcasts, Twitter, blogs, web video, web comics, games of all kinds, mobile devices, and more.  (I have a whole book about this, if you’re curious) 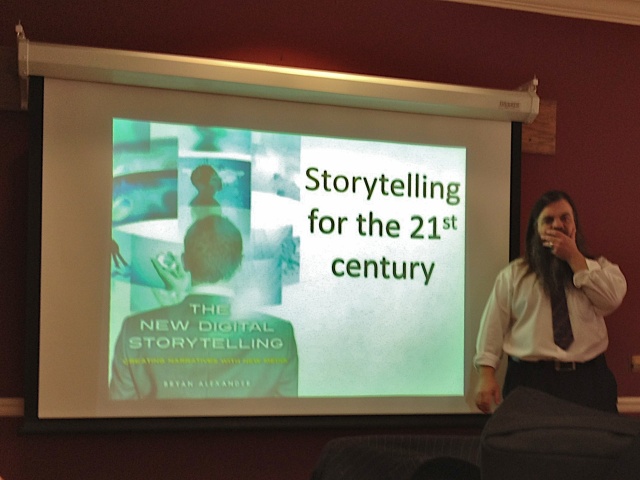 For much of the 20th century storytelling belonged to the big players, the record labels, the movie studios, the major publishers, newspapers, and radio and tv networks.  We gradually lost the skills and practice to make and share our own stories.  But digital technologies have returned to use those arts, and we’re running wild with them.

Yes, there are all kinds of problems with these technologies.  Some of them are made by sociopathic companies.  Some users misuse them to torment other people.  Inequalities warp popular access to them.  Copyright and privacy have become painful if not vile.  I could go on… but amidst these problems, people reach forth, pluck out ways of telling stories, and get creative.  We’re living through a creative renaissance, and can see evidence of it every day.  Renaissances tend to be uneven and messy, true.  But we can celebrate this rebirth of human creativity.  We can help it, and join in.

The second is the rising generation of young people.  I’m not thinking of millennials but their successors.  Call them Generation Z or Homelanders, born in the late 90s and afterwards, and think about the heavy burden we’ve placed on them.

They don’t remember the world before 9-11.  The war on terror has framed their lives.  The security state that appalls some of us is just an assumed reality for them.

They are coming of age when global warming is accelerating.  It’s something everyone discusses, and they know adults aren’t stopped it.  Some adults are actually, openly making climate change worse, making mitigation harder.  Indeed, they and their children may look back on our time as The Age of Stupid.

The economy blew up with they were kids or teenagers.  Think about that.  Unlike, say, Baby Boomers, who came of age during a period of massive economic expansion, Gen Z grew up when globalization capitalism nearly killed itself.  In the United States, which caused the disaster, “recovery” has been very weak, where it happens, and took a long time.

They’ve been told they need to go to college in order to have a chance of surviving in this battered economy.  To do so, they have to go into greater amounts of debt than any prior generation in American history, debt so great that it already trammels the economy by depressing graduates’ spending habits.  Imagine being 25 and owing $30,000, which is the median amount held by students who owe.

Meanwhile, older folks despise this generation.  Homelanders’ elders mock the kids for being entitled, coddled, swaddled in fake honors, sheltered into a too-long childhood.  Oh, the disdain is thick.  Check out the issue of Ms. Marvel when Gen Zers who have internalized these hits discuss killing themselves as the most honorable response.

Disdain from elders, growing up under the war on terror, watching climate change careen into dystopia, struggling under bad economics, and shouldering mountains of debt – confronted by these pressures, a generation could easily turn to nihilism. In response, the Homelanders could have turned to violent revolt.  They could just collapse into themselves and accomplish nothing.

Instead?  These people just get to work.  They go to college.  They work low-paying jobs in a gig economy.  They create like mad, using technologies and practices old and new.  They use technology to get political, and they’re making new and daring politics.  In school they take the technologies and pedagogies we gingerly hand them, and sometimes run with them.  They are nerdier than anybody, and conscious of being geeks for good.

They could be killing us, people.  And they’re not.  They’re good.  Better than we deserve, in fact, given what we’ve done with the world, and how many of us treat them.

So I look at these rising young people, and how a growing number of people seize new technologies to make stories, and I can keep going.  My heart lifts up.  The work connects with meaning, and a better future beckons.

How about you?  What keeps optimism in your soul these days?
(Ms. Marvel cover by Arthur Adams, via Wikipedia; dark clouds by Quinn Dombrowski; thanks to Alan Levine for conversation)

This entry was posted in demographics, personal, technology, Uncategorized. Bookmark the permalink.